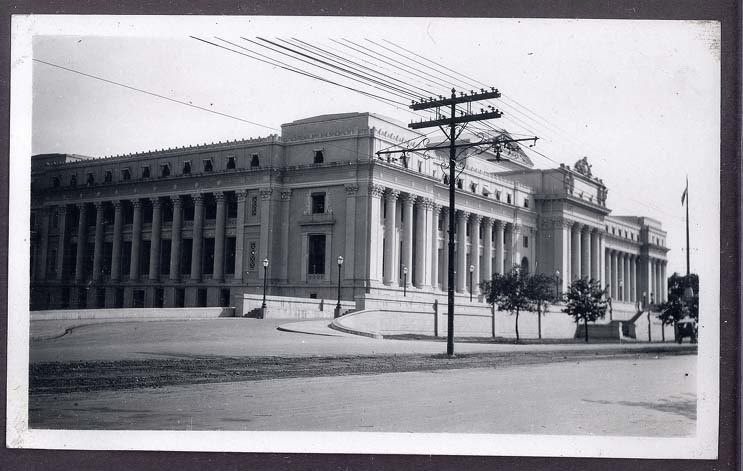 The old Legislative Building during the pre-war years. © Skyscrapercity.com

The old Legislative Building is, without a doubt, the best example of neo-classical architecture in the Philippines. It has been the place for the country's statesmen for decades, it has witnessed wars, demonstrations and calamities.

The Legislative Building during its construction in the 1920s. © Arkitekturang Filipino

The building today is the present National Museum of the Philippines. Located on Burgos Drive, this imposing edifice stands across the old walled city of Manila (Intramuros). Originally designed by the American Ralph Harrington Doane and Filipino Antonio Toledo in 1918 to be the future National Library as intended for the Burnham Plan of Manila. 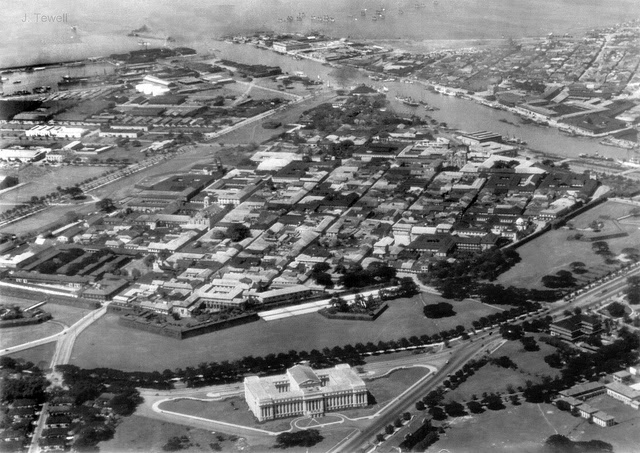 An aerial view of the walled city of Intramuros. In the foreground is the Legislative Building. © Flickr/John Tewell 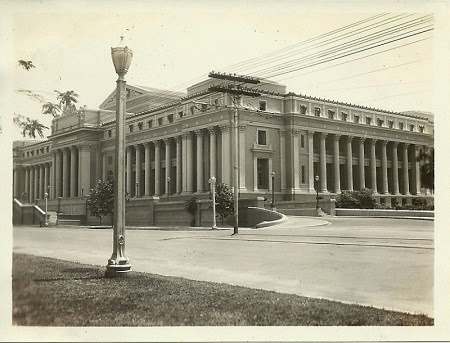 The building's front and side portion colonnaded with beautiful Corinthian columns. © Pinoy Shooter

The construction of the building started in 1918, but had delays because of funding. In 1926, the Philippine Legislature decided to move into the building and thus changing the layout of its interiors. The interiors of the structure was designed by the great Juan Arellano, who also built several Manila edifices such as the Post Office Building and the Manila Metropolitan Theatre. A plan for the City of Manila done by the American urban planner Daniel Burnham. The positioning of the government edifices is seen near the old walled city. © Wikipedia 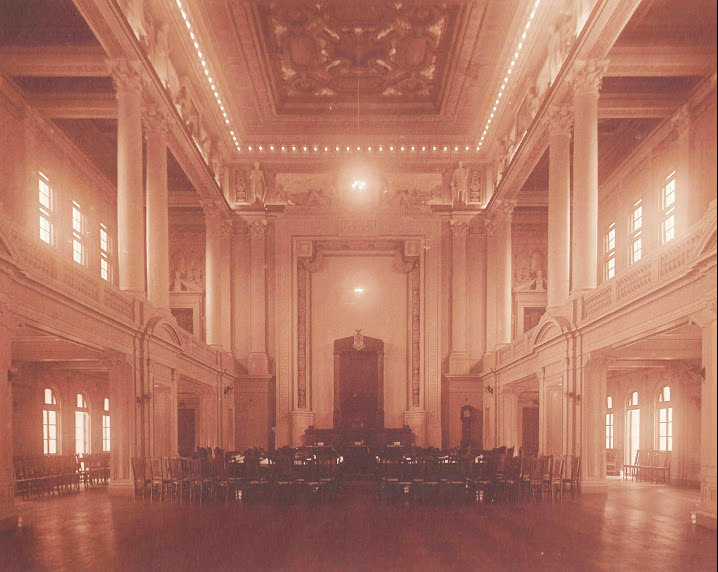 The Session Hall of the Senate, circa 1926. © Official Gazette

"The Old Session Hall of the Senate of the Philippines is a chamber like no other in the country. Soaring three stories to the top of the Old Legislative Building, the hall was clearly intended to be nothing less than a secular cathedral – a temple of wisdom for enlightened debate and the making of laws.

During the early 1920s in the American colonial period, when the architect Juan Arellano was revising the plans of Ralph Harrington Doane in order to convert the building from the museum and library it was originally designed to be the seat of the legislature, the Senate was led by Manuel L. Quezon, the leader of the movement for Philippine independence from the United States. It is highly probable that Senate President Quezon exercised much influence over the design of the chamber where he would preside over the body that he himself had helped establish in 1916. With his strong personal aesthetic, well-known taste for grandeur, and deep belief in the need to promote confidence and respect by the Americans in the nascent all-Filipino institutions, it is easy to picture Quezon working with Arellano on the dimensions and decoration of the Session Hall. Whatever the case, the result was breathtaking with the combination of the lofty space with its mezzanine galleries for the public and the dizzying range of precast ornamentation crowned by a magnificent hardwood ceiling." 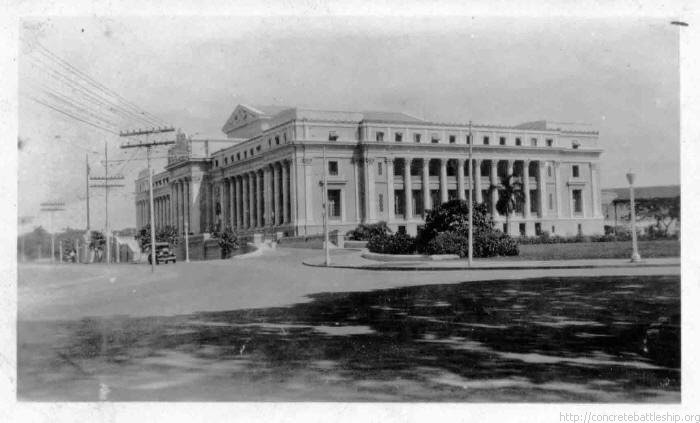 The Legislative Building viewed from Burgos Drive. © Corregidor.org
"The most impressive features of the hall, taking full advantage of the architectural space, are undoubtedly the series of Corinthian columns and pilasters, the main wall above the rostrum with its fretwork and garlands, and most of all, the sculptural groupings surrounding the top of the hall. This ornamentation and all other decoration in the Hall was the work of the most celebrated Filipino sculptor of the time, Isabelo Tampinco—a contemporary of Juan Luna and Jose Rizal—and his sons Angel and Vidal. Tampinco gave full rein to his deep knowledge of classical sculpture, as well as to his personal artistic mission of Filipinizing many of the traditionally Western elements and motifs of the neoclassical style. The result, an entablature of great lawmakers and moralists through history and allegorical groupings, was and remains to this day an outstanding and unique achievement in Philippine art. 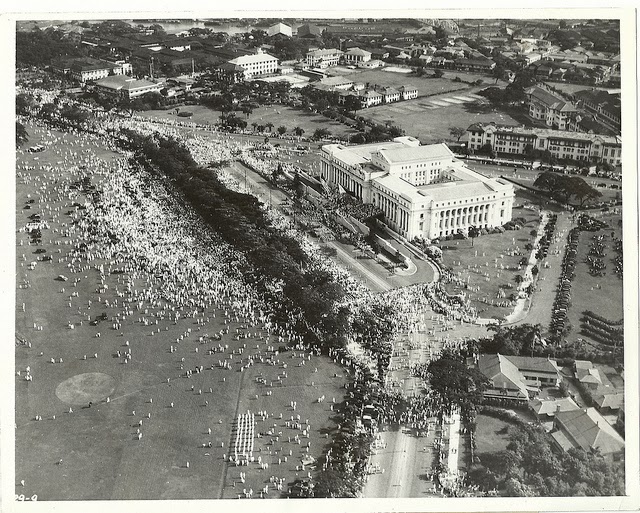 Filipino masses gather outside the Legislative Building for the inauguration of the Philippine Commonwealth and its first president, Manuel L. Quezon. © Flickr/Sepia Lens

The standing figures of the entablature represent great lawmakers and moralists of history ranging from antiquity and Biblical times to the twentieth century, and include Kalantiaw and Apolinario Mabini on the East (Main) Wall; Pope Leo XIII and Woodrow Wilson on the West (Rear Wall); Moses, Hammurabi, Rameses the Great, Li Si, Augustus and William Blackstone on the North (Right) Wall; and Solon, Averroes, Justinian, Manu, Charlemagne and Hugo Grotius on the South (Left) Wall. Surrounding the cartouches on all four walls are allegorical groupings representing sovereignty, progress, arts and culture, industry, trade, farming, education, and so on." (excerpt from Official Gazette) 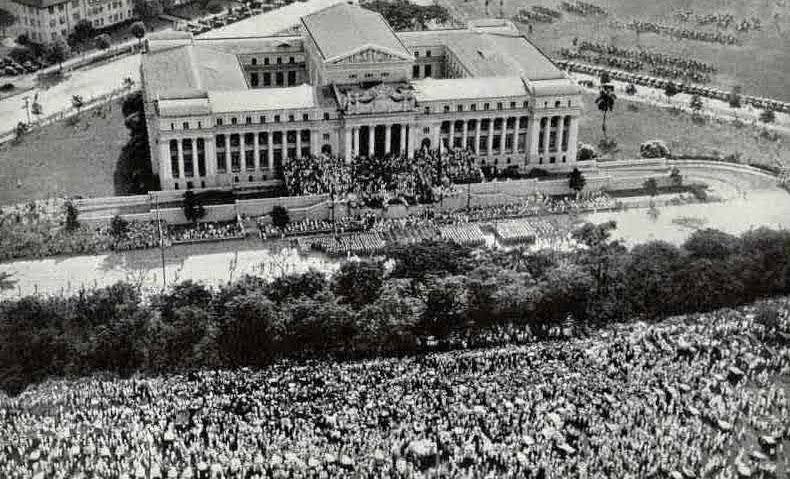 An aerial view of the inauguration of President Manuel L. Quezon outside the Legislative Building. © The Kahimyang Project 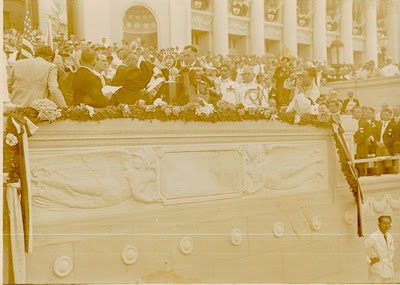 Manuel L. Quezon's oath as President of the Commonwealth of the Philippines. Notice the ornate podium of the Legislative Building. © Flickr/Manuel Quezon III

In 1935, the Legislative Building became the place of inauguration of the newly-established Philippine Commonwealth. Also, this is where the late President Manuel L. Quezon was inaugurated. 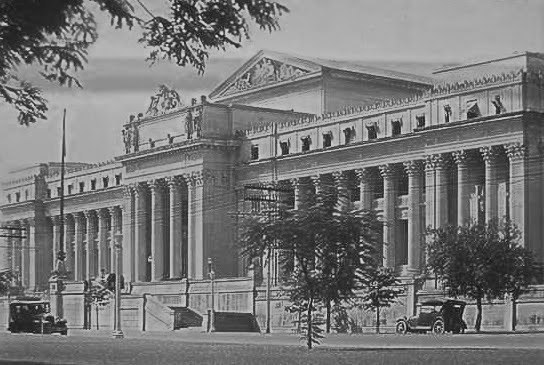 The Legislative Building before the establishment of the Philippine Commonwealth. © Skyscrapercity.com via Nostalgia Filipinas

According to the description, it is a massive rectangular building which has a central portion flanked by two interior courts. The central portion houses both the Lower and Upper Houses. On the main floor, the House of Representatives held its sessions there while the Senate is on the third floor. The senate chamber has a fifteen (15) meter high ceiling. On its walls are statues of Filipino heroes and legislators, and on the two wings of the building are the offices of the legislators. 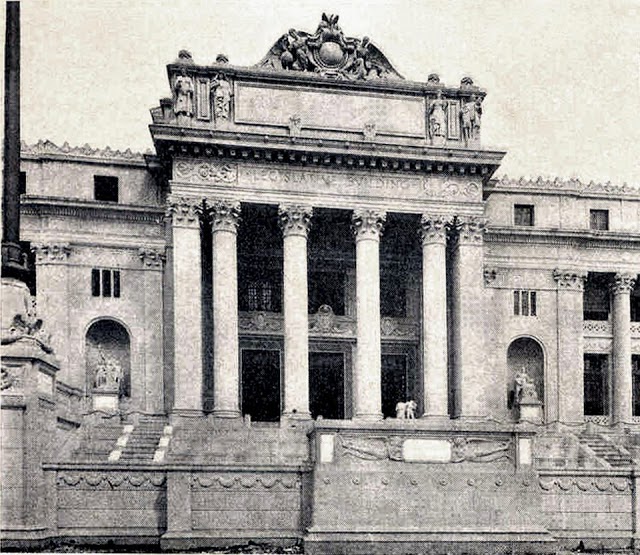 A two-storey, four-columned portico adorned the entrance of the Legislative Building. Over it is a triangular pediment with sculptures representing Luzon, Visayas, Mindanao, Law, Education, Commerce, and Agriculture. On each end of the building is a two-columned portico complimenting its central facade. The sculptures were designed and made by Otto Fischer-Credo, a German expatriate who resided in the Philippines during the pre-war years. He was recalled back to Germany during the war years to be an artist for the Third Reich, and did sculptures for Adolf Hitler and SS chief Heinrich Himmler. 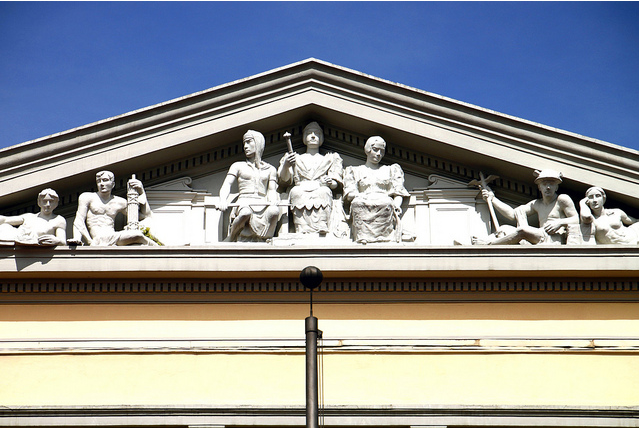 The Japanese occupation of the Philippines meant a halt to the existing Commonwealth Government. The Japanese had set up a Japanese-Sponsored Government headed by the late Pres. Jose P. Laurel. The building was used as the assembly hall of the puppet government. The speaker of the National Assembly was Benigno Aquino, Sr., grandfather of Pres. Benigno 'BS' Aquino III. 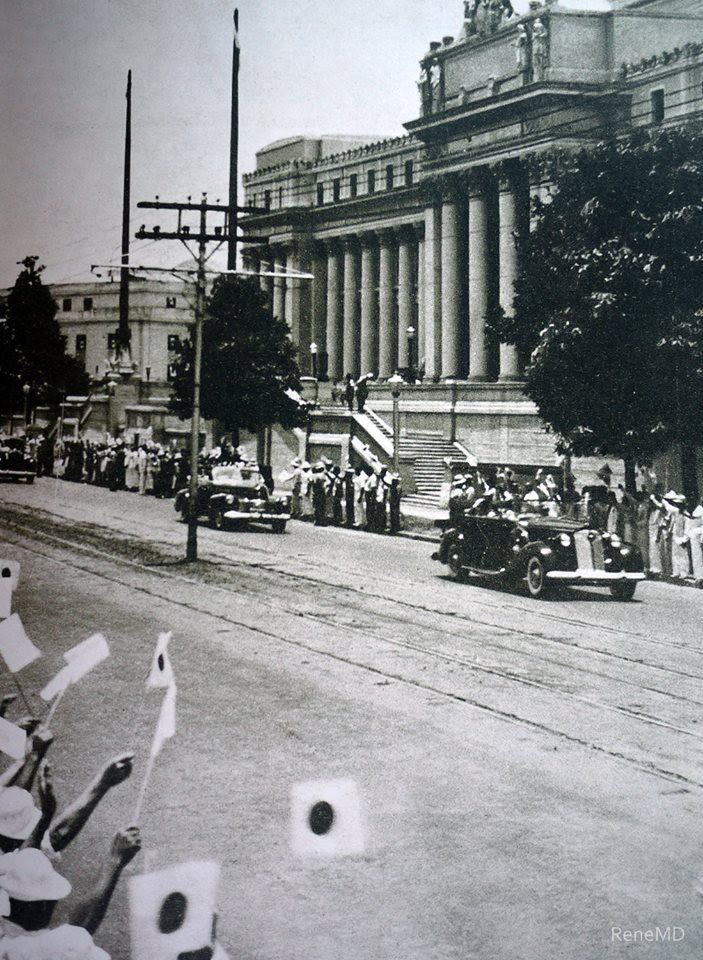 A motorcade for Japanese Prime Minister Hideki Tojo in front of the old Legislative Building on May 5, 1943. © Manila Nostalgia/Rene Dominguez

The Legislative Building became the home of the Japanese-Sponsored Republic of the Philippines. It became a home to Japanese propaganda. © Arkitekturang Filipino 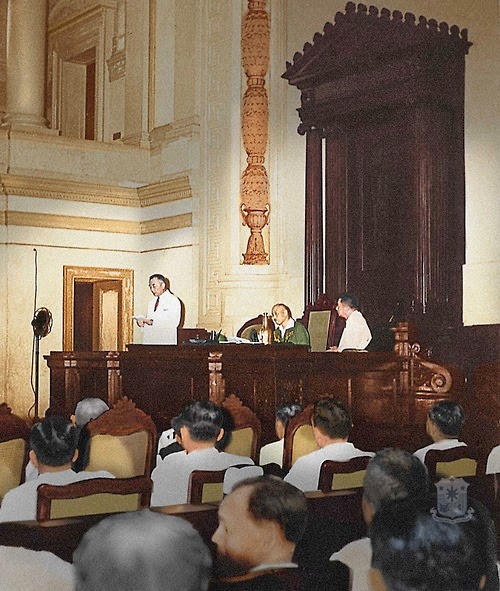 A colored photo of the Senate chamber during the Japanese occupation. On the podium speaking is Sec. Jorge Vargas. Take note of the Japanese military officer seated. © Presidential Museum and Library

In February of 1945, American troops entered Manila trying to liberate the city from the Japanese Imperial Army. The battle became the worst urban fighting in the Pacific, sweeping eighty (80) percent of Manila's buildings. The Legislative Building was not spared from total annihilation. Because of its massive size and thick walls, it became the headquarters of the Japanese Imperial Army. The Americans shelled the building until it was totally destroyed. Only the central portion of the building stood but still had major damages. 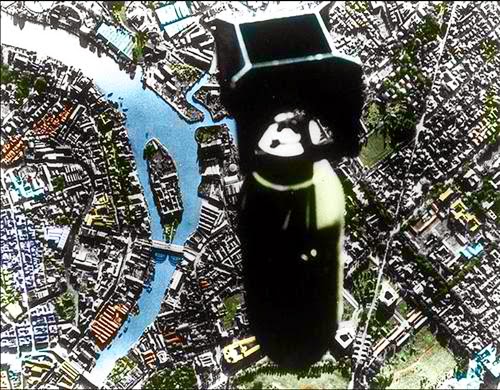 A 2000lb bomb being dropped by American bombers onto the City of Manila. © WWII in Color via Nostalgia Filipinas 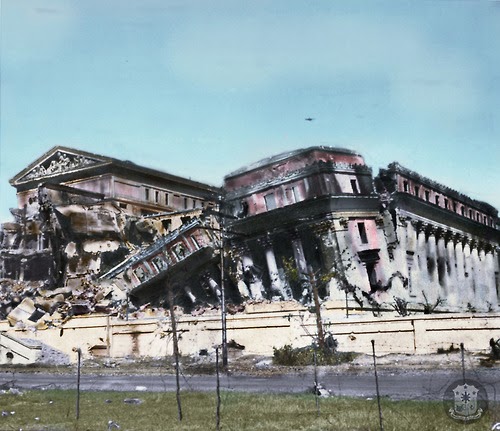 A colored photo of the destroyed Legislative Building. © Presidential Museum and Library 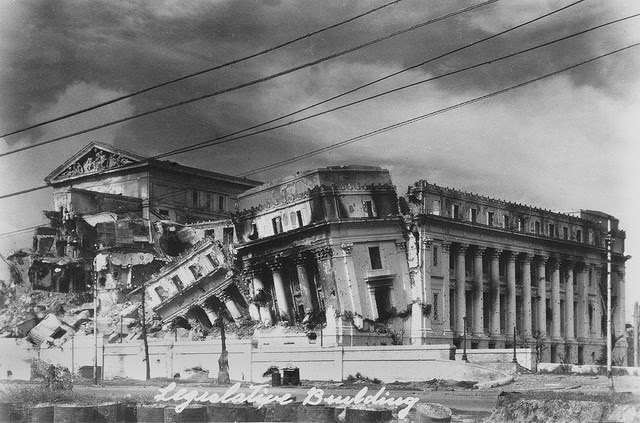 The war-torn Legislative Building. Note that the left portion of the building was still standing. © Flickr/John Tewell 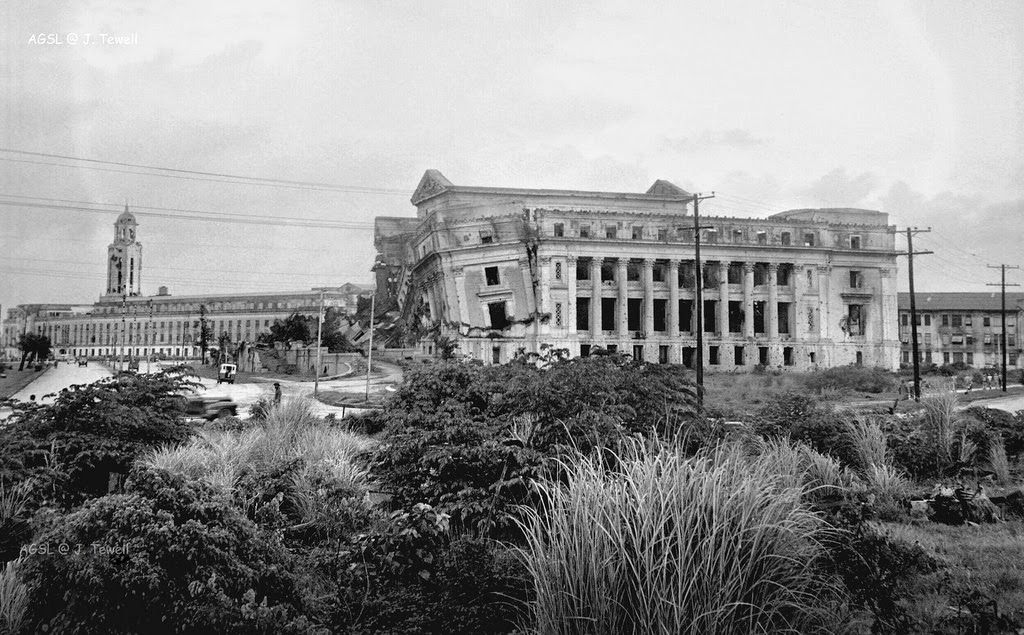 The Legislative Building (center), together with the Manila City Hall (left) and the Philippine Normal School (right), in ruins after a heavy battle for the city. © Flickr/John Tewell

Manila became an urban battlefield in which 100,000 civilians were killed. Many of Manila's imposing structures were destroyed such as the Post Office, the Agriculture and Finance Buildings, the UP campus, etc. After the Philippines became an independent nation in 1946, the United States aided the Philippines with some $400,000,000.00 of war damage payments, another $120,000,000.00 for public works and left a total of $100,000,000.00 worth of war surplus. 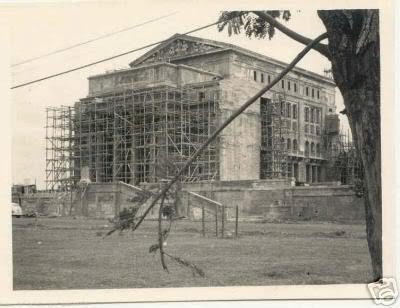 Reconstruction of the Legislative Building is underway. © Skyscrapercity.com

The reconstruction of the Legislative Building started in 1949 until 1950. The building was renamed from "Legislative Building" to "Congress-Republic of the Philippines". The post-war version of the building was not as accurate as the pre-war version. The original plans were not followed, the once colonnaded facade having the full, engaged columns were replaced with a less ornate pilasters. 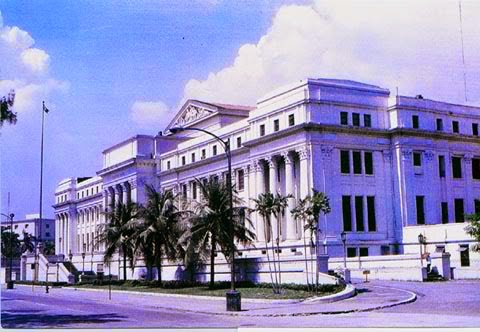 The post-war Legislative Building. The building was rebuilt using the same dimensions, but with lesser ornamentations. © Skyscrapercity.com

After its reconstruction, Congress once again held its sessions until 1972, when Proclamation 1081 (Martial Law) was implemented by President Ferdinand Marcos. The building was re-inscribed with the name "Executive House" which was lent to different government agencies such as the Office of the Prime Minister on the fourth floor, the Office of the Ombudsman (Tanodbayan) on the third floor, the National Museum on the second floor and the Sandiganbayan (Peoples' Advocate) on the first floor. 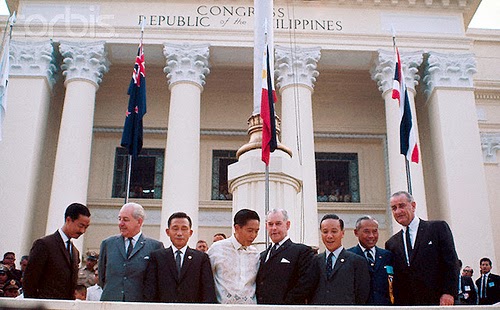 Leaders of SEATO member nations gather outside the Legislative Building in Manila during a summit in 1966. Notice the less ornate portico of the post-war structure. © Flickr/Manhhai

The Senate, House of Representatives and other various government agencies occupied the Legislative Building until 1997 when the Senate relocated its offices at the GSIS Building in Pasay, making the National Museum its only occupant. The "National Museum act of 1998" was turned into law which makes the Legislative Building, together with its adjacent buildings, the former Agriculture and Finance Buildings under their care. 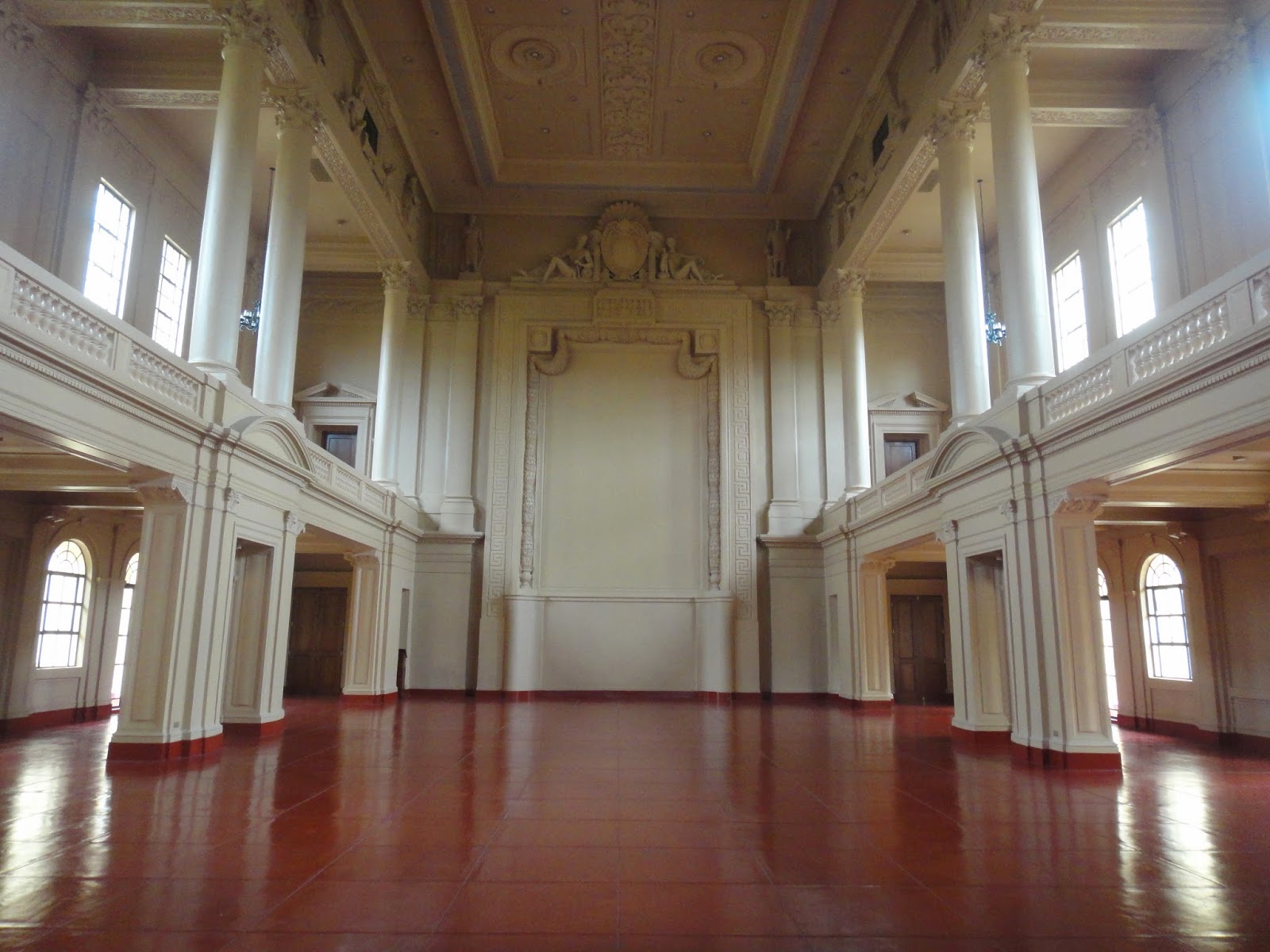 The newly-restored Senate Session Hall of the Legislative Building. Restoration of the Session Hall was completed in 2012. © Interaksyon.com