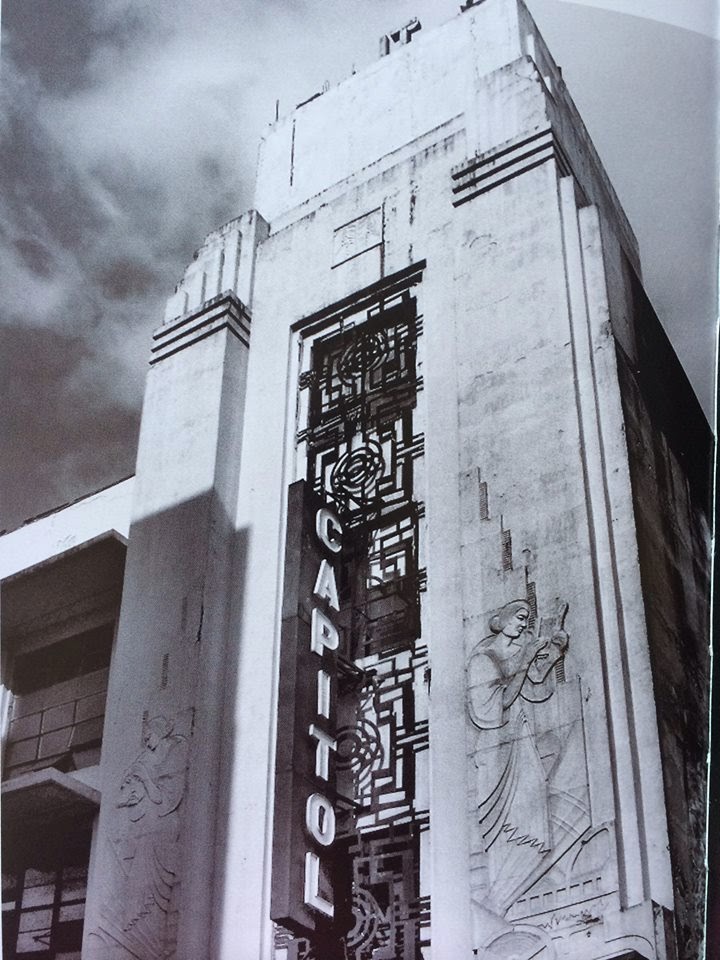 Pre-war Manila was a city of entertainment, its streets lined with nightclubs, cabarets, theaters, cinemas, and social clubs. The city had so much theaters that some were built right in front or beside each other. So, along the stretch of the beautiful Escolta is a first-class theater that many members of the alta sociedad prefer, which is the Capitol Theater.

The Capitol Theater sits on prime land at the western side of the Escolta, once the country's premier business and shopping area north of the Pasig River. The Capitol Theater is one of the city's many cinema theaters, but not the Escolta's only cinema as its rival (later sister) theater Lyric is only two buildings away from the Capitol. 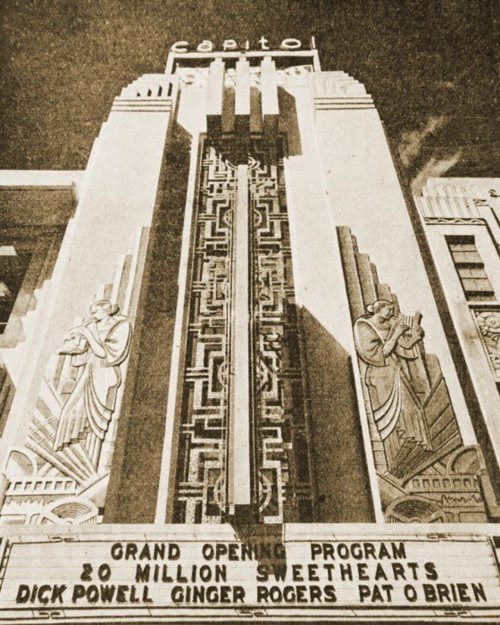 A photo of the Capitol during its grand opening. © Lougopal.com/Manila Nostalgia

The Capitol Theater was built in 1935, and a masterpiece of National Artist Juan F. Nakpil de Jesús, who also designed the Pérez Samanillo Building together with the great Andrés Luna de San Pedro. It was designed and built in the art-deco style of architecture, an architectural style that was prevalent in the 1920s and 1930s. The Capitol had a total of eight hundred seats, and one of Manila's air-conditioned theaters. One interesting feature of the Capitol was its design. Inside the theater, Nakpil made use of double balconies, which was then a rare architectural design. Its lobby adorned murals designed by the triumvirate composed of Filipino modernists Victorio C. Edades, Carlos V. Francisco, and Galo B. Ocampo. According to documents, Nakpil originally commissioned Edades to work on the mural. Edades then chose 'Botong' Francisco to be his assistant, who then brought with him Ocampo. The three had just returned from the United States and hoped to change the Philippine art scene long dominated by the masters Fernando Amorsolo and Guillermo Tolentino. 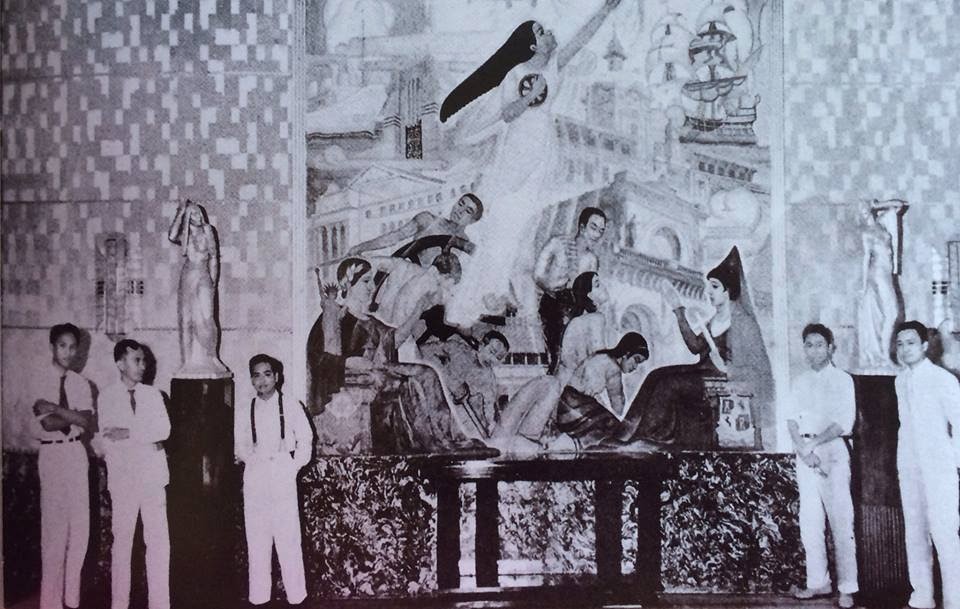 There are other interesting things about the Capitol Theater. Its façade has two bas-relief sculptures designed by Italian sculptor and expatriate Francesco Riccardo Monti. Monti's other works also include the bas-relief sculpture called 'Furies' at the old Meralco (then Manila Electric Railroad and Light Company, now the Manila Electric Company) Building along Calle San Marcelino, sculptures atop University of Santo Tomás' main building, and the sculptures at the Quezón Memorial in Quezón City. 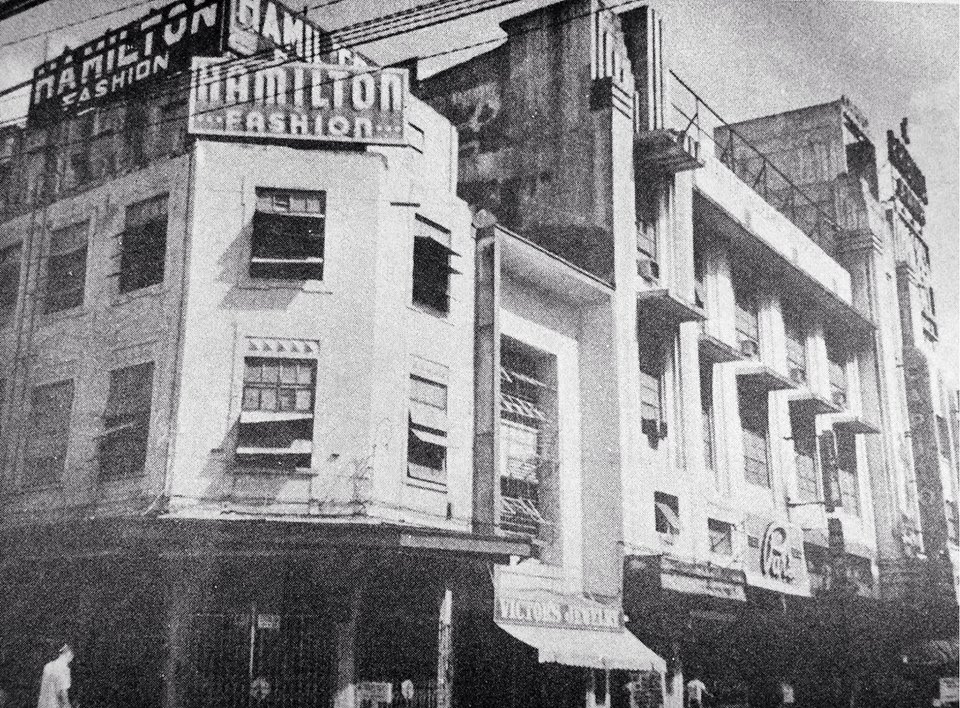 Escolta corner Calle Nueva. The Capitol Theater can be seen on the right side of the photo. © Manila Nostalgia/Isidra Reyes

The bas-relief at the Capitol portrays two Filipinas in the tradional Filipiniana attire. Both sculptures are placed on both sides of the theater's façade.

"The Capitol Theater, designed by Juan Nakpil in 1935, explicitly portrays Filipinas in the native garb on the front elevations. The women, set within a tropical landscape, evoke a faraway rural and bucolic place very much different from the urbanized and built-up setting of the commercial district of Escolta in Manila. If the situation is closely inspected, the Filipino designers employing art deco were not considered as part of the “rural folk” being represented in the stylistic ornamentations, but rather were metropolitanized architects who were in fact part of the “new” cultural elite of cosmopolitan Manila (Salamanca 1968, 91-92). Thus, they were not necessarily experiencing in their daily lives the “rural” and “native” imagery that they were enacting." (excerpt from Heritage Conservation Society) 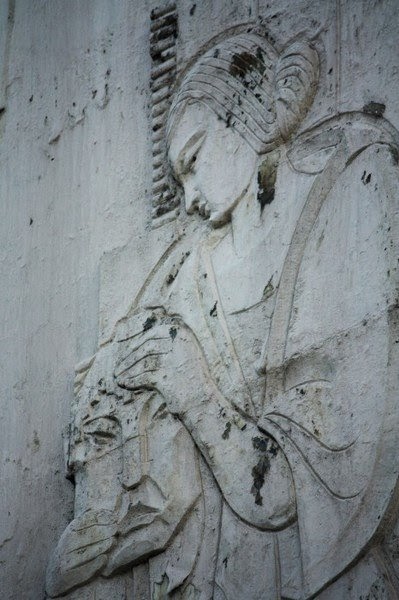 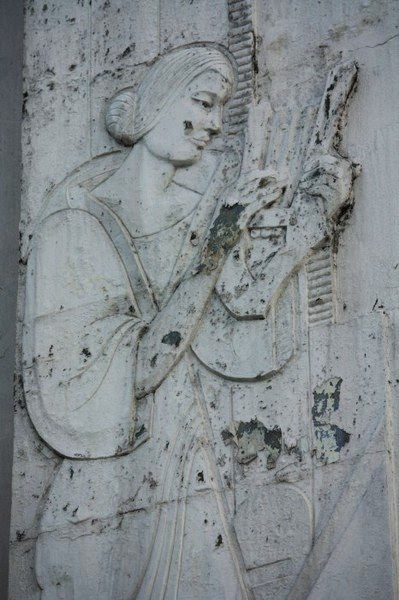 The Capitol was owned and operated by theater moguls Vicente and Ernesto Rufino, whose family owned many theaters throughout the city such as the Lyric, State, Grand, Ever, and Avenue Theaters. But, according to José Victor Torres' 'Manila: Studies in Urban Cultures and Traditions', the Tuason family first owned the Capitol through their purchase of the Eastern Theatrical Company Inc.

"The heirs of Demetrio Tuason first engaged in show business by purchasing the Eastern Theatrical Enterprises which owned the Fox Theater and operated the Metropolitan Theater. The Tuason family then put up the Eastern Theatrical Co., Inc. The encouraging results prodded the heirs to build the Capitol Theater at the Escolta which was inaugurated in 1935. This also became the new office of the family company. The company also purchased the Lyric Theater from the Peoples Bank and Trust Company in 1939. This acquisition made the company sole owners of the two modern movie houses at the Escolta.  The Lyric Theater in itself had an interesting history. In 1917, the Exhibitor’s Exchange, which was owned by the firm of France and Goulette, built the first Lyric Theater on the side of the old Botica Boie at the Escolta. It was remodeled in 1927, changed ownership in 1935 and remodeled again in 1937. President of the Eastern Theatrical Co., Inc. was Jose Tuason and Nicasio Tuason was General Manager." (excerpt from Manila: Studies in Urban Cultures and Traditions) 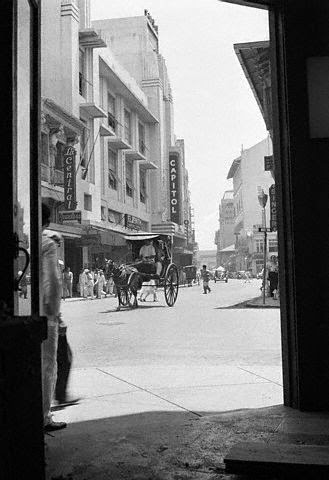 The Capitol and the Escolta viewed from inside a shop also along the majestic street. Photo taken sometime in the late 1930s. © Lougopal.com/Manila Nostalgia 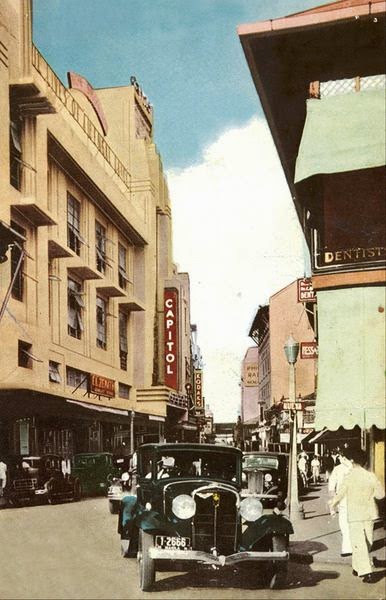 A colored photo, probably a postcard, of the Escolta business area. The Capitol is on the left side of the photo. © Arquitectura Manila Photo File 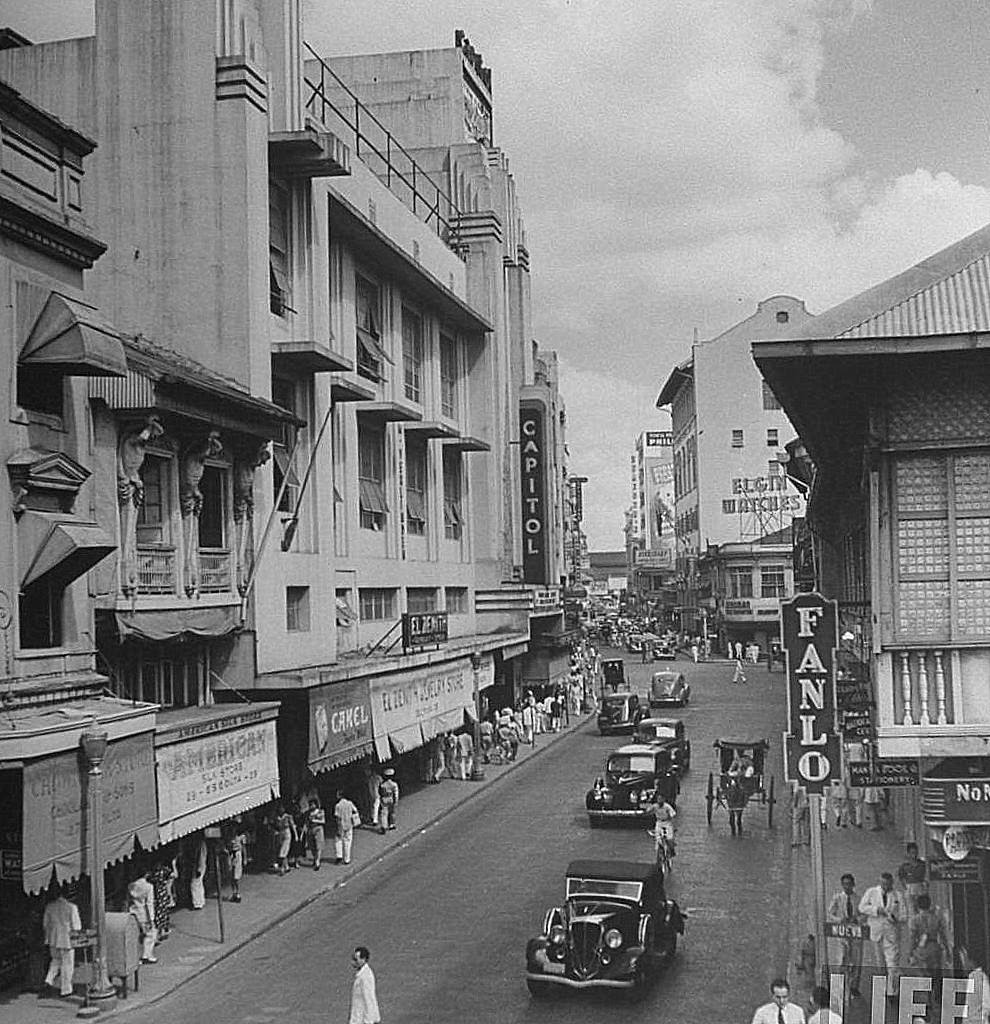 Escolta and the Capitol during the mid-thirties. © LIFE via Flickr/Beyond Forgetting


The Japanese occupation came about in 1942, with the defeat of the combined Filipino and American forces in Corregidor. During the war years, the Escolta still continued to be the center of gravity in the city. Since most theaters in the city featured American films before the war, they were banned from being showed by the Japanese High Command. The Capitol instead showed local films, live production acts, and Japanese propaganda tools. It has been said that Fernando Poe Sr. was a film producer in the Capitol during the Japanese occupation. 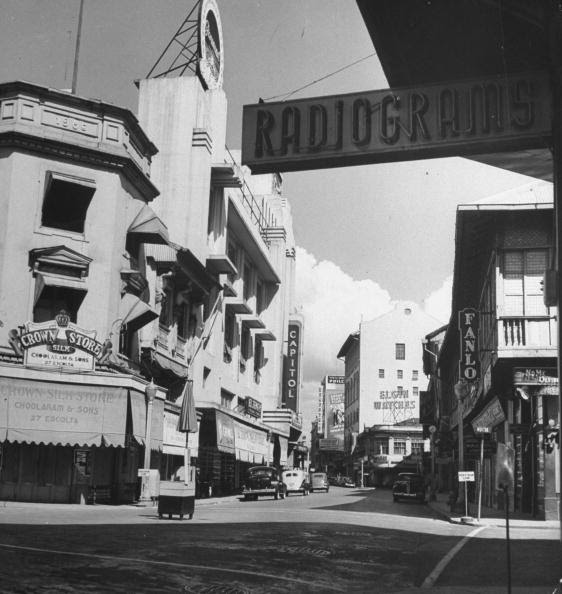 The Battle of Manila had ravaged more than eighty percent of the city's infrastructure, displaced hundreds of thousands of civilians, and left one hundred thousand civilians dead. The Capitol was one of the unfortunate buildings that were damaged, though not as destroyed as her neighbors like the Crystal Arcade, Cu-Unjieng Building, and the Masonic Temple. 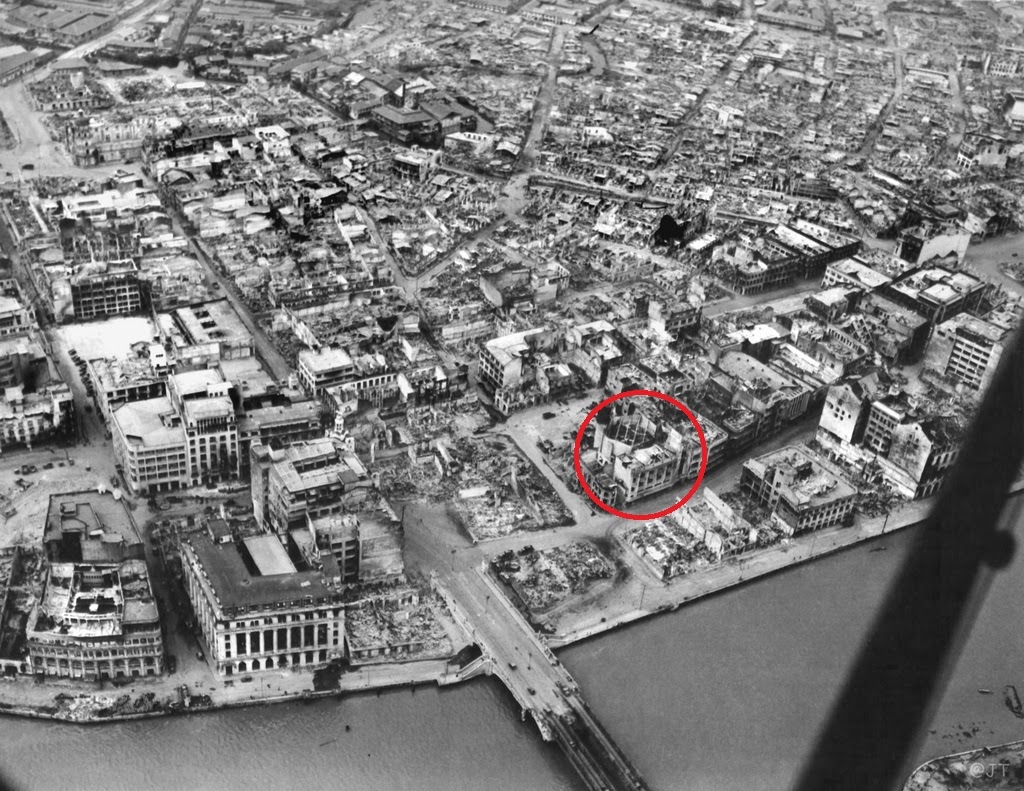 An aerial view of the Escolta-Binondo-Sta. Cruz areas showing the extent of damages done by both American and Japanese forces. The Capitol (encircled) can also be seen. © Flickr/John Tewell

Life at the Escolta came back to life after the liberation of the city. The Capitol was renovated and was once again up and running until it ceased operations decades ago. This was the trend of movie theaters in Manila during the late 1970s to the 1980s, where standalone theaters close due to the opening of shopping malls that include movie theaters. Today, many standalone theaters no longer feature blockbuster films, but rather operate underground where soft pornographic films, or bomba, are shown.

Recently, the Capitol's interior has been abandoned, leaving only its façade. Several small business establishments and a restaurant used to operate inside. 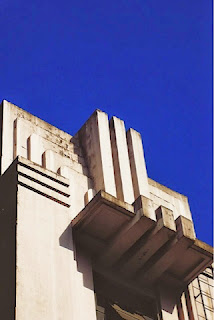 There are initiatives done to preserve the historic Escolta. The Escolta Commercial Association is an organization composed of owners of business establishments along the Escolta. Also, another intiative called 'Hola Escolta' was made in 2012 which seeks the revitalization of the Escolta.

Here at A.M., our goal is to educate the Filipino people about Manila's glorious architectural past. These built heritage are a part of our nation's history, may it be signifcant or not. To do this, we must preserve the architecture of the past as we are its stewards. We do not own these historic structures, we are only taking care of it for the next generation.  So, in the words of Ayala Corporation President and COO Fernando Zóbel de Ayala Miranda: "Your focus is always on the legacy, on the history, and really looking forward to the next generation, and making sure that you pass the baton in the same way that it has been passed on to you." 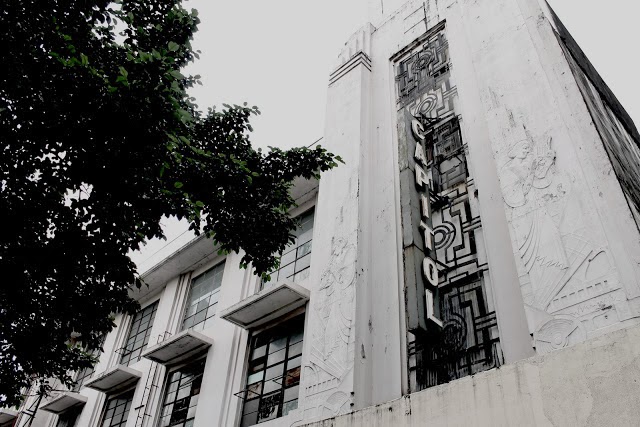