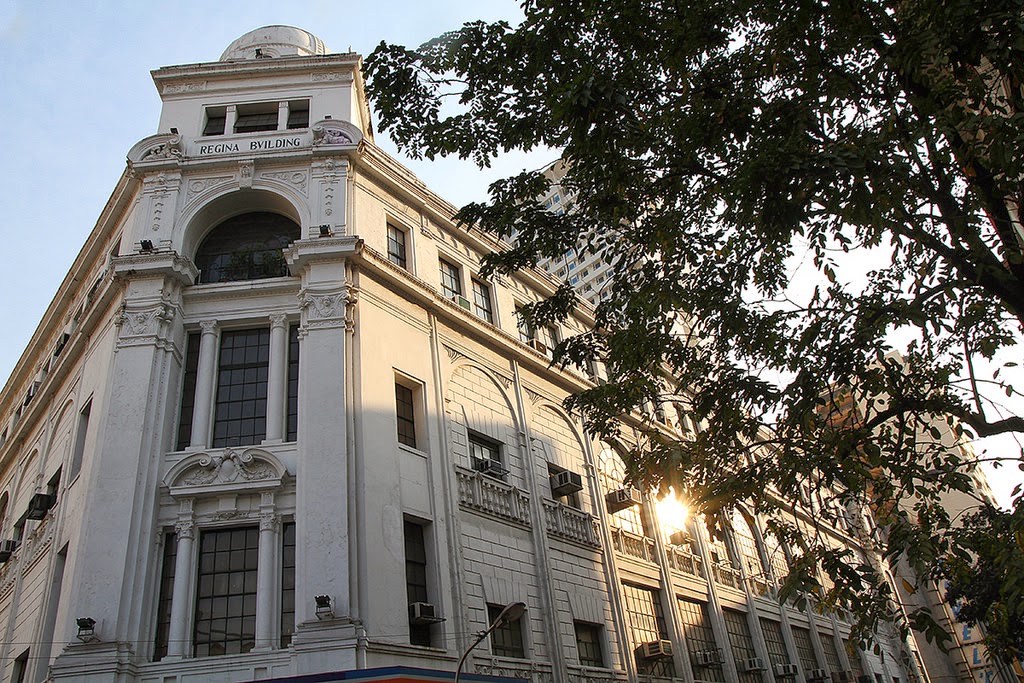 The Regina Building along the Escolta, c. 2014. Ⓒ Flickr/mrbinondo

We all know that the pre-war City of Manila was considered as the best city in the Far East, at par with those in Europe and in the Americas. Visitors who came into the city were amazed on what the city has to offer. In fact, when the Japanese paraded their troops in Manila, they were envious that Manila was way more beautiful than their own Tokyo. We owe our gratitude not only to the people who worked hard to make the Pearl of the Orient Seas one of the best, but we also have to recognize the structures that made our city unique.

The pre-war business districts of Binondo and Sta. Cruz boast a number of beautiful office buildings. One of these buildings is the famed Regina Building along the famed Escolta. 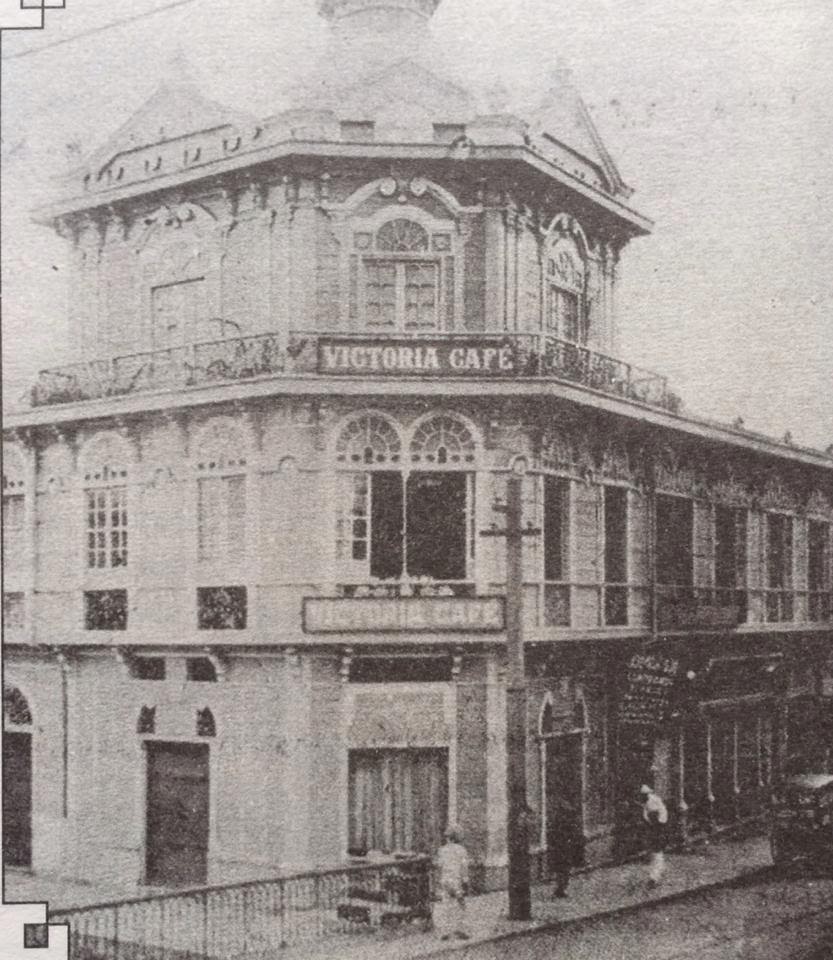 The predecessor of the Regina Building, the old Edificio Roxas on the corner of the Escolta and Calle Banquero facing Plaza Sta. Cruz. Photo taken sometime in 1905. Ⓒ Manila Nostalgia/Isidra Reyes

Before the present Regina Building was built, another building stood on its location. The old Roxas Building was located opposite the Pérez-Samanillo Building, occupying a block from Calle David (now Burke St.) to Calle Banquero. The building had two wings, with the concrete building facing Calle David and the Pasig which was occupied by the offices of the Roxas y Cía, and Pedro P. Roxas y Cía. The other wing faces the Estero de la Reina and Plaza Sta. Cruz which a quaint coffee shop called Victoria Café occupies. The owners of the old Roxas Building were the de Ayala-Roxas family, specifically Doña Carmen de Ayala Roxas de Roxas, widow of rich man-nationalist Don Pedro Pablo Roxas Castro. 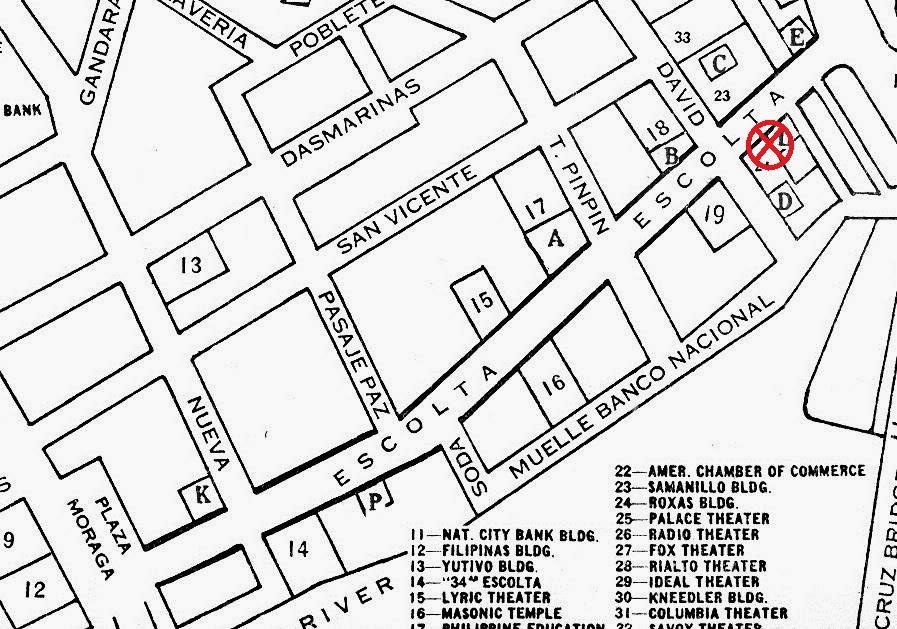 Pre-war map of the Escolta-Binondo business district. The concrete Roxas Building is on the top right hand side (24), while the old building is the letter 'L'. Ⓒ Manila Nostalgia/Lou Gopal via John Harper 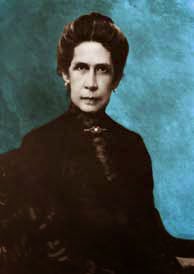 The de Ayala-Roxas matriarch and heiress Doña Carmen de Ayala Roxas de Roxas died in 1930. As a result, the Roxas family sold the property to Don José Leoncio de León, a prominent industrialist from Pampanga. The old structure facing the estero was demolished and was replaced by a concrete building. 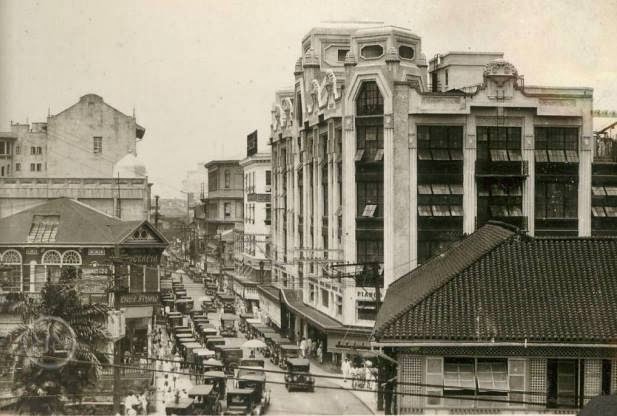 The old and new Roxas Buildings (left) in the 1920s. The old bahay na bato building has been renovated (the previous photo shows that the house had a third storey). The newer building facing Calle David can be seen at the back of the old building. Ⓒ Manila Nostalgia/Lou Gopal 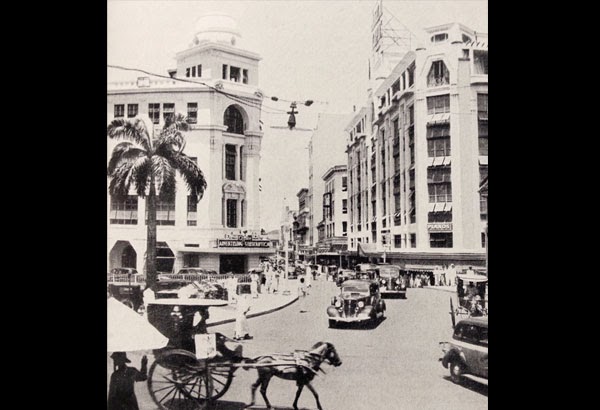 The Regina and the Pérez-Samanillo Buildings act as the entrance to the Escolta from Plaza Sta. Cruz. Ⓒ The Philippine Star

The building was designed by two architects, Fernando H. Ocampo, and the great Andrés Luna de San Pedro. Ocampo was credited in designing and renovating the existing concrete building while Luna was the one who designed the new building facing the estero and Plaza Sta. Cruz. One of the tenants of the building was Pacific Motors, dealer of General Motors vehicles in Manila. 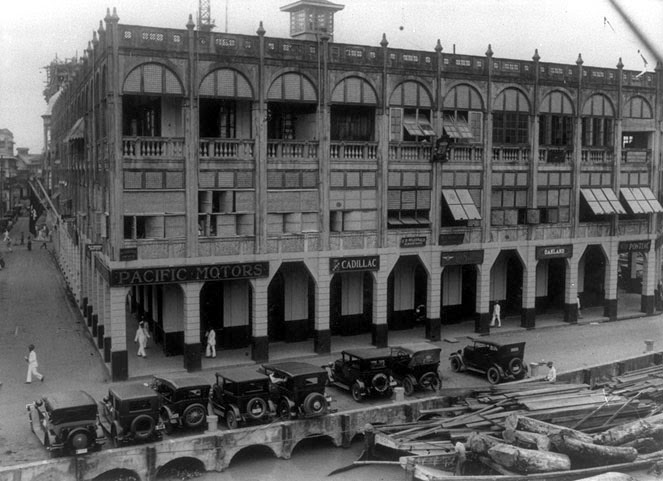 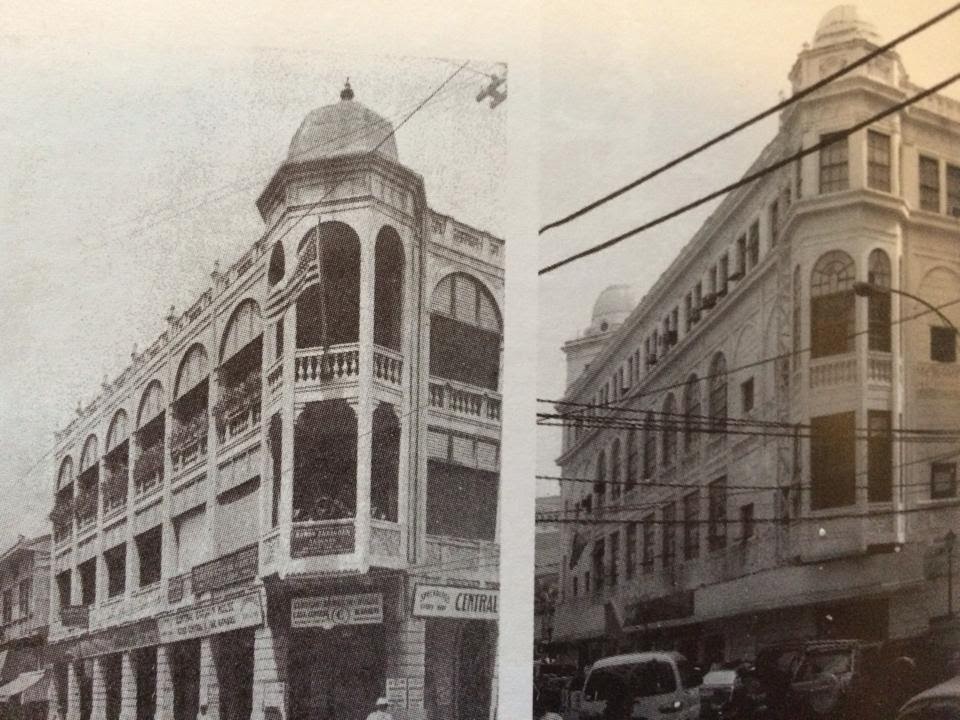 The before and after photos of the renovation of the Roxas Building. Ⓒ Arkitekturang Filipino via Isidra Reyes

In 1934, the new building was completed. Designed in a mixed neo-classical and beaux-arts styles by Andrés Luna de San Pedro. The new building annexed the old building facing the Pasig. The building was renamed as the Regina, in honor of José Leoncio de León's wife, heiress Regina Joven Gutiérrez Hizon de León. The building became the offices of the de León businesses of Pampanga Sugar Development Co. (PASUDECO) and National Life Insurance Co.

The war in 1945 brought destruction to the city. The block-by-block, street-by-street, building-by-building, and room-by-room fighting lost more than 80 percent of the city's structures, with the Escolta-Binondo business area inflicting the most damage. Unfortunately, the Regina was not spared in the battle. However, it only had minor damages and was repaired afterwards. 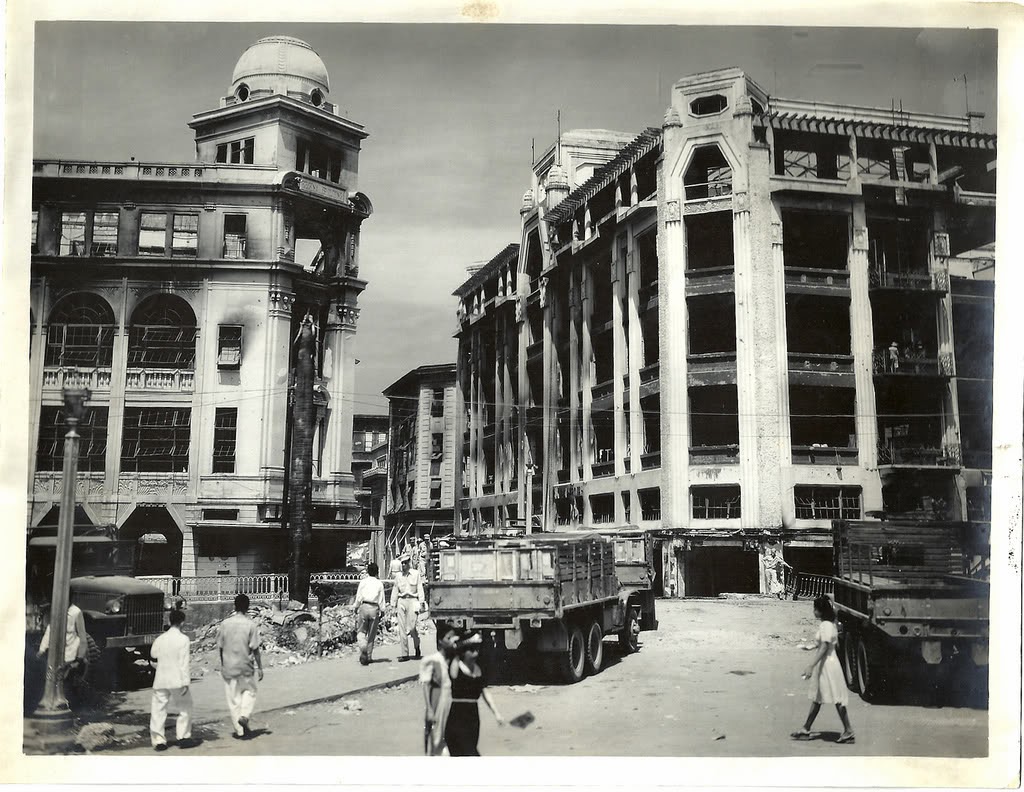 The Regina Building (left), and the Pérez-Samanillo Building (right) partially damaged during the Liberation of Manila in 1945. Ⓒ Photobucket

The post-war years saw a new era for the Regina Building. Most of the de León businesses were housed in the Regina and its sister property, the Natividad Building. Today, the building is still owned by the heirs of Don José Leoncio de León of the PASUDECO wealth. 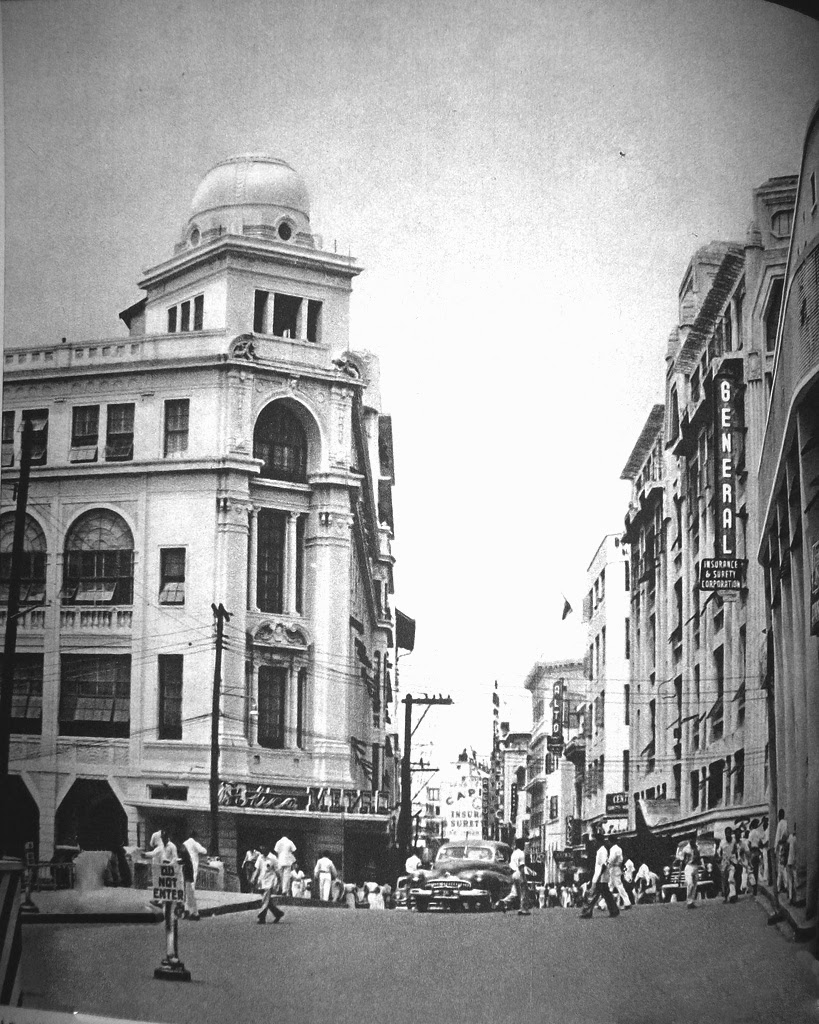 The Regina Building during the 1950s. Ⓒ Lougopal.com/Manila Nostalgia

An express of interest over Escolta's rehabilitation as a tourist spot was raised after the victory of incumbent mayor of Manila Joseph Estrada. Also, a tour entitled #VivaManila was conceived by celebrity tour guide/activist Carlos Celdran. He aims to restore the former glory of Manila's historic districts, which includes the Escolta-Binondo business area. We at A.M. fully support the plans of the city government of Manila in restoring of not only of the Escolta, but the rehabilitation of the city as a whole. 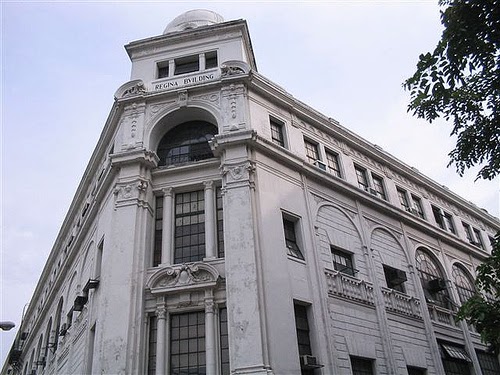